Late to the War 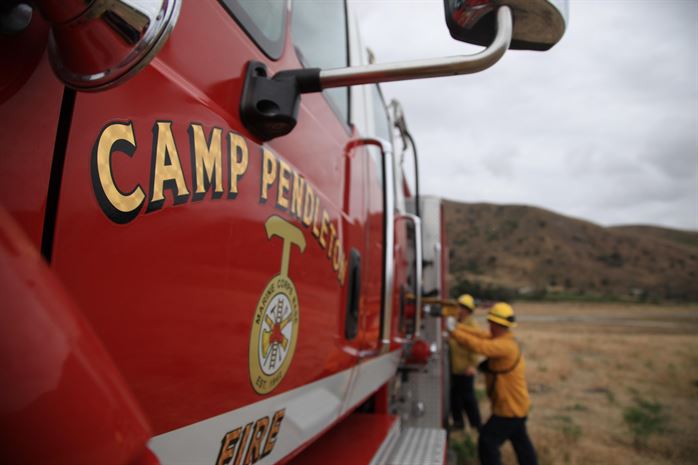 The giant Marine/Navy complex that is Camp Pendleton is about a ninety-minute drive south of Los Angeles. It was a sleepy area in those days. Jimmy started out from Virginia by bus. When he was changing buses in a small southern town, curiosity got the best of him and he went in to a club to hear jazz music. He sipped whiskey at the end of the bar, chatting up the bartender. “Go get ’em, General,” the barman said as Jimmy left with a skip to his walk. The bus had left, so he killed a day in town until the next bus. He was yet to become the world traveler with a favorite room at the Ritz and a platinum card from flying the Concorde, so he kept getting on the wrong buses, circling the Southwest until he reached the Pacific Ocean and could go no further.

The commanding officer (CO) at Pendleton had little sympathy for the cocky young officer-to-be as he presented his papers in August 1952.

My father stood at attention in front of the CO. The conversation, and what followed, as Dad described it, went like this:

CO: Let me get this straight. You were dispatched from Quantico six weeks ago to complete your officer’s training here as a second lieutenant in the US Marines while we are at war with fucking KO-rr-EA and you’re just getting here NOW? AND you failed to qualify with an M-1 carbine? But it says here they passed you anyway?

SOLDIER: That’s correct, Captain. I have other skills.

CO: Are you a wise guy (looking at his orders), Second Lieutenant James Michael La Rossa from Brooklyn, New York?

JIMMY: To tell you the truth, I got lost getting here. I stopped here and there.

CO: You stopped? For what, son?

Jimmy gives him a hard stare. He’s getting annoyed.

CO: Well, I hope you had fun because there’s not a bunk left in the camp.

Jimmy turns, picks up his duffel and heads for the door.

CO: Where you going, Lieutenant?

JIMMY: Back to Quantico to tell them that Commanding Officer Whatever Your Name Is was just full up with lieutenants, which is just as well because he can’t even pronounce the name of our enemy. IT’S KOREA, professor.
K-O-R-E-A.

Jimmy turns, salutes, and walks out, slamming the door hard behind him.

Later in the day, the CO leaves his office and heads for his car. He stops and stares in amazement. That same kid from Brooklyn is playing handball against a wall with a bunch of other Marines. He doesn’t have a glove, so his hand is bleeding, but he’s beaten, everyone. His pockets bulge with cash. Jimmy sees the CO and walks to him.

CO: I thought you’d be halfway to Virginia by now.

CO: I thought I did until I saw you play. I have an extra glove somewhere.

CO: Listen (softening), I grew up around here. If you head south there’s a little town with a nice apartment house right on the water. The Corp. will pay for your quarters. You can train with your platoon here until your orders come through.

CO: The town’s called Laguna Beach and the apartment name is The Sunset. Tell ’em Floyd from Pendleton sent you.

Jimmy snaps to attention and salutes.

Captain Floyd shakes his head and walks off.

Two months later, Jimmy is out looking at the beach in his boxer shorts, a hot coffee mug in his hand. He lights a cigarette with a lighter that looks like a pistol. (Before Dad adopted his trademark gold Cartier lighter, he collected a series of pistol and rifle lighters, which were always kicking around the house. I guess it was his way of making fun of guns.)

Jimmy walks back toward the apartment and yells, “SURF’S UP.” His entire platoon has all moved to the apartment house. “Morning, Lieutenant,” they greet Jimmy. The men head for the beach with their surfboards.

It’s a slow day, so Jimmy asks one of the men to drop him off at a saloon near base. “Sure, Lieutenant. You are some lucky dude. All the brass around here and the prettiest barmaid in a hundred square miles has her eye on you. Must be that Brooklyn charm.”

Dad would love to talk about the ramshackle bar off a dusty road on the way to camp. A very pretty girl behind the bar slips him a menu. Under the menu is a copy of the New York Daily News she’s been holding for him. He gives her a smile. A bunch of other officers are standing around drinking, eating, and flirting with Jeannie. At the end of the bar is an older, senior officer. Jimmy notices the hat on the bar. He’s a general. The officer plays it cool, putting the hat on the stool next to him. Jimmy nods at the older man.

Jeannie puts a club sandwich in front of Jimmy. She throws him a subtle kiss. The general has an eye on the young lieutenant and sees Jeannie’s air kiss. Jimmy asks softly, “Hey, Jeannie, what’s the guy at the end of the bar drinking? Bring me one and then bring him another. Just tell him it’s on the house, would you, babe?”

She gives him a sly smile.

When the drink is in front of the general, Jimmy continues to read the newspaper, picks up his glass, and takes a long draught. He doesn’t look at the general, but he feels his eyes on him. He lights a cigarette with his pistol lighter.

Dad is reading the paper when a loud sports car skids to a stop in front of the bar. Almost everyone turns to see a new Corvette convertible. An officer in full dress blues comes in and struts to Jeannie.

“Well that’s it, Jean, I’m shipping out,” the officer announced.

She hesitates. “Well, you’ll be missed.”

“Here—take this to remember me.” He throws her the car keys and puts his hand over his heart.

“Mind her till I get back, would you, Jeannie?” He’s out the door and gone.

Jeannie looks at Jimmy and throws the keys to him. The general looks at the lucky kid and grins. He could use that kind of luck, he thinks! An hour later Jimmy is driving down a dusty road in the Corvette. A sign says “Laguna Beach—1 Mile,” as the serene Pacific appears in the distance. You just can’t make this stuff up.

A few months later, Jimmy is playing handball with some of his men at the base. The CO and the same general from the bar are arguing and can be heard through the open window of the captain’s office. They are both motioning to the Marines playing handball.

Finally, the CO stands, salutes, and reluctantly capitulates to the general’s request. The general steps outside. He and Jimmy exchange knowing glances. When the general is gone, the CO stomps out to the handball court. “Lieutenant,” he yells at Jimmy.

JIMMY: So our orders have come through?

Jimmy glances at the men and gives them a smirk. He snaps to attention.

CO: You and your squad have been deployed.

He hands Jimmy the paperwork and stomps off.

Twenty-five years later, Dad was in a helicopter landing in the parking lot of Giants Stadium with Perry Duryea, a very prominent client who was running for governor of New York at the time. Dad gets out of the copter. As the blades slow, he hears, “Hey, La Rossa—I knew you’d make it.” Sure enough it was the CO from Pendleton. Jimmy grinned. “Fuck you, Floyd,” he responded without a beat and gave him a snappy little salute as he was whisked into the game with Duryea. If you don’t believe that success is the best revenge, try that on for size someday.