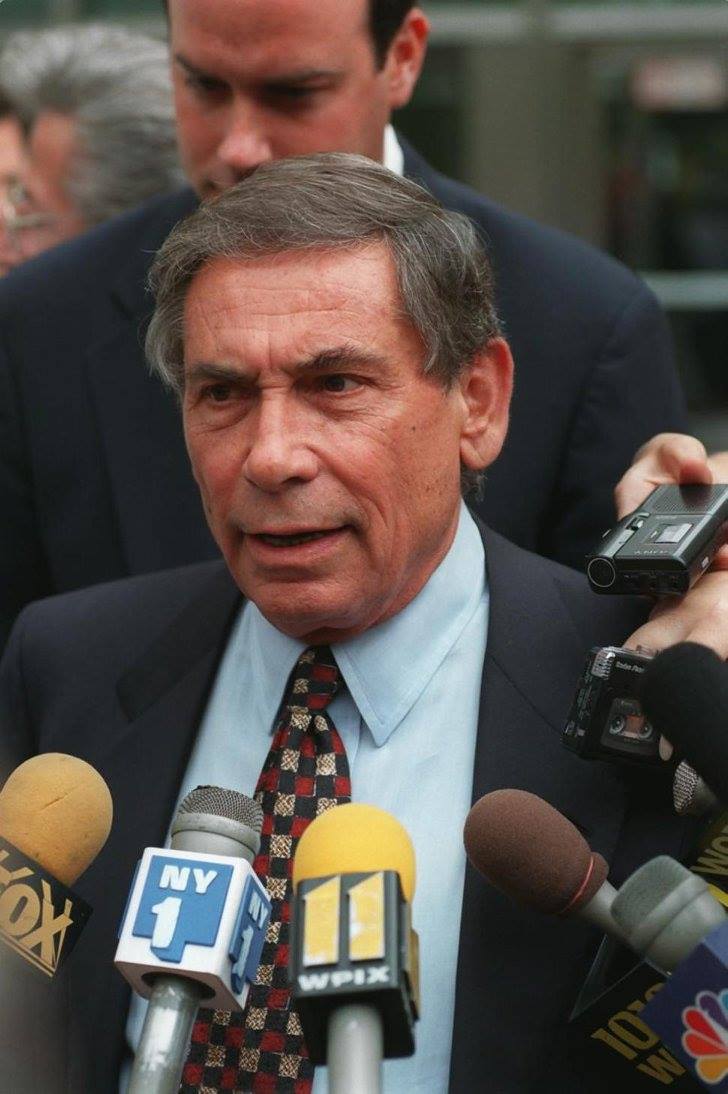 Last of the Gladiators, A Son’s Memoir, was originally titled LAWYERS GUNS & MONEY and began as a lengthy treatment for a television series. LAWYERS GUNS & MONEY is a registered trademark of Jimmy Boy Productions LLC, Los Angeles CA., Category 041 -“Entertainment services in the nature of an ongoing historical drama.”

Lawyers, Guns & Money (LGM) is the one-of-a-kind true-life account of organized crime, politics, trial law, personal redemption, indomitable spirit and loyalty, that can only be told by the one man who rode the eye of the storm and lived to tell it: Trial lawyer Jimmy La Rossa.

LGM takes place in New York City of the 1970s, 80s and 90s — when the Big Apple was the world’s undisputed epicenter of organized crime. For those three decades, the most feared assassins, counterfeiters, de-frocked politicians of every stripe, and Arab bankers arriving in the dead of night in their private jets, sought the counsel of one man: Jimmy La Rossa.

Once a Kennedy-era prosecutor, Brooklyn-born Jimmy La Rossa became the greatest criminal trial lawyer of his day. Jimmy was the one man who knew where all the bodies were buried and everyone knew it. It seemed, then, almost impossible to the thousands of people who owed their lives to Jimmy that one day he would simply disappear from New York. Forever.

In the tradition of stories as varied as Sunset Boulevard, Raging Bull, and Forest Gump, LGM is a fascinating “floating memoir,” narrated by Jimmy’s son and confidante, Jimmy Jr. After sneaking his dying father from New York Hospital to a waiting MedVac jet, the duo spend the next five years in the protected anonymity of a place no one would look for two die-hard New Yorkers: An ocean cottage in Manhattan Beach California.

For the next five years, Jimmy Jr. cooked his wheelchair-bound father his favorite Italian dishes, somehow keeping the wiley lawyer alive using the most advanced medical technology. A master bedroom suite outfitted better than most hospital rooms is the venue from which Jimmy Jr. gradually narrates his father’s notorious life story. While the son corrals his father’s near photographic memory into a digital recorder, a criminal tapestry of a generation unfolds with amazing intensity and clarity through the eyes of the master trial lawyer of his generation.

From their anonymous house by the Pacific Ocean, we travel in real time — episode by episode — to witness some of the most spectacular jury trials ever seen, the inner workings of the mafia in its prime, cocaine-fueled politicians and judges, political bosses, gun runners, the Israeli Mosad, Columbian drug kingpins, and even money launderers who had infiltrated the highest order of New York’s Orthodox Jewry.

From the 1970s Watergate investigation to the present day, this unforgettable true tale is a comprehensive history of sin and redemption in both high-flying board rooms and smoke- filled back rooms, where the right lawyers, guns, and money could mean everlasting life or a hard, hard, finale.

JAMES M. LAROSSA ESQ. ( JIMMY ), the most important trial lawyer of his generation, lay dying in The New York Presbyterian Hospital after collapsing in federal court moments before he was to deliver his opening remarks to a packed court- room on behalf of a billionaire New York builder who was swept up in a life-ending RICO indictment that he would not survive without JIMMY’s significant expertise.

Ensconced in the ultra-secure wing of the Greenberg Pavilion for 10 days in a state of semi-consciousness, JIMMY is secured from a myriad of dangers by his son and lifelong confidante, JR. As teams of lawyers and the psychotic billionaire client him- self attempt to crash JIMMY’s room, JR asks some of his father’s former clients to help keep him secure and alive.

While a host of colorful mobsters batten down the hospital, JR decides to play the best card he has: A daring, stealth escape via Medevac Gulfstream to an undisclosed location, which he has outfitted with the advanced security and a full medical wing — having determined months ago that a ‘kidnapping’ was his father’s best and only real chance to survive.

JR, a publisher, had sold most of his publications and was sitting on enough cash to finance his father’s exile. As an only child, JR was absorbed into his father’s world of lawyers, guns and money at an early age, and as the years went on, father and son became intimate confidantes and friends.

In an episode echoing Carlo Gambino, Joey and Albert Gallo, Bob Dylan, and some of the most famous actual trial scenes ever recorded, a real-time accounting between father and son unfold. These scenes include the most notorious crimes of a generation set under the backdrop of historical events such as the 1974 Ali-Frazier fight at Madison Square Garden and Richard Nixon’s resignation later the same year.

JIMMY’s high-flying 40-year career had taken its toll on his body. His pulmonary system is shot, he has little strength in his legs, and his blood work is showing the preliminary signs of cancer somewhere in his gut. He had been rushed to the hospital twice before this latest episode. Nevertheless, JIMMY remains an unstoppable force of nature. His famed baritone voice, fast wit, uncanny ability to digest large quantities of Kettle One vodka and good humor is, amazingly, all intact.

By way of background, we discover that JIMMY’s wife of 38-years and JR’s mother, Marie, a Lucile Ball-like character, had died of MS 10-years prior. Having never lived alone, JIMMY jumped into a second marriage with a much younger French woman, who was estranged and MIA with her boyfriend some- where in Europe.

With the assistance of one of the hospital’s most prominent physicians, the legendary trial lawyer is somehow snuck through the giant hospital labyrinth to a waiting private ambulance — which plods unassumingly through the early November morning to a private hangar at Teterboro Airport. After a dramatic signing of legal papers in an airline hanger, the duo are airborne. The story, how- ever, is just beginning.

Who would pursue them was uncertain, but that they would one day come was a near certainty. Once word leaked that JIMMY had disappeared, the Levin case would collapse into chaos and hundreds of people who owed JIMMY their lives could conclude that the confidences JIMMY protected in his encyclopedic mind might be in jeopardy.

JIMMY interacted with the inner workings of every major mob family for three decades. He held the secrets of numerous politicians, judges and political bosses. He knew the identities of Israeli Mossed and Columbian drug kingpins that walked around town like regular citizens. He was even aware of the identities of the money launderers who had infiltrated the highest order of New York’s Orthodox Jewry. When JIMMY disappeared from the face of the earth, questions would be asked. JR’s plan would have to work flawlessly.